Earlier this week I posted my reaction to the news that rail fares would rise significantly in the new year.

It was reported that the rise would be set to an average of 3.4%.

Some constituents have since been in touch to point out that Northern Rail are saying their fares will rise by an average of 4.7% and this has caused some confusion. 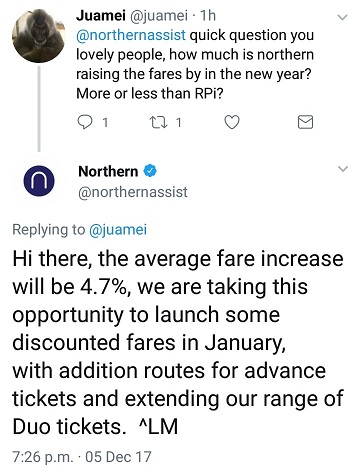 The reason for the difference is that not all fares are regulated by the Government. Northern do have the ability to have even higher increases on unregulated journeys.

To clear up some of the confusion I’ve pulled together the current prices and the new prices for some key local journeys. This way you can see the real difference to your travel costs, both in terms of cash and as a percentage increase.

Northern will be promoting the long awaited arrival of extra off-peak services in Bromley Cross in the next few days, which I welcome, but I’m sure local residents will be shocked that using these services will cost almost 7% more in four weeks time.

When so many people are struggling with the cost of living we should not be seeing such high increases in the cost of public transport. As I said on Tuesday, this will be a slap in the face for passengers who are already so badly let down by the standards of our local rail services.