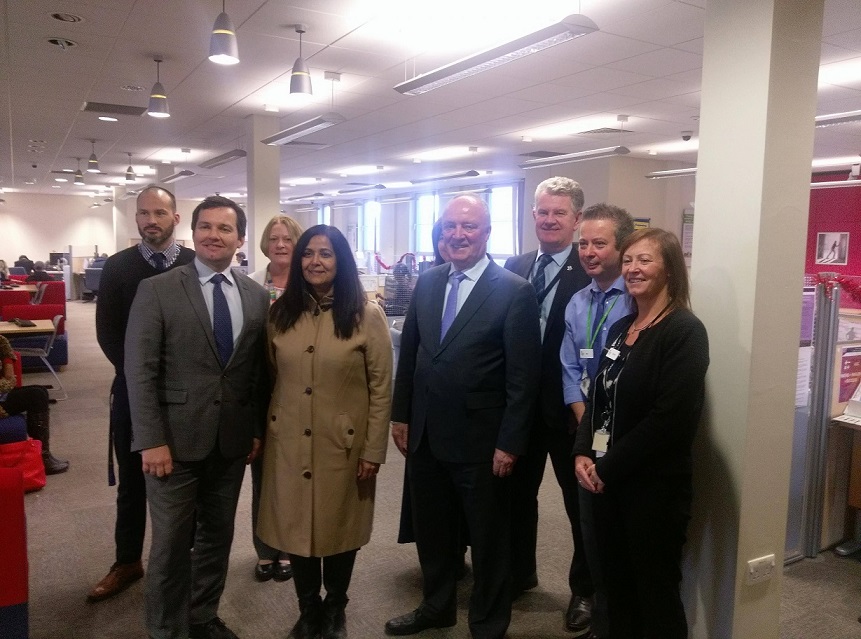 Last week I visited the local Jobcentre Plus on Blackhorse Street.

I and the other Bolton MPs met with the work coaches at the Jobcentre to discuss the work that they do.

It was encouraging to hear that now when you sign on you have a single work coach, with whom you interact every time you visit – rather than needing to explain your circumstances to a different person each time.

There is a fresh focus on helping people to find work and overcome any barriers that may prevent that. You can even contact them for advice after you move into work if you are still looking for a job.

The Jobcentre itself has been redesigned since my last visit. The clunky job point machines have gone, replaced by PCs that anyone is free to use. Plus there is recognition that not everything needs to be modern, with paper copies of vacancies printed off, organised by sector, and displayed on the walls.

Unfortunately it remains the case that the administration of benefits and the work of the Jobcentre are separated within the institution. Complaints about claims still need to be done via phone or online, and there doesn’t seem to be any effort by the Department for Work and Pensions to make the process easier.

The introduction of Universal Credit has been a major source of concern for local residents and I took the opportunity to speak to some of the staff who are managing that transition.

I am pleased to report that Bolton Jobcentre is reallocating staff back to supporting claims for existing benefits, such as Jobseekers Allowance. There will be less of a drive to push people into the new Universal Credit system while changes announced during the budget are still being implemented.

Bolton was scheduled to switch to full Universal Credit for all claimants by next June, this has now been pushed back to next November.

I still have serious concerns about the system and I hope that Labour will be able to secure more concessions from the Government to make life easier for claimants before the full rollout happens.