Transpennine Express – Bring back our trains

In my main blog post today I wrote that First Transpennine Express were breaking a promise to Bolton train passengers by failing to restore valued Scottish services. I thought some of my constituents may appreciate some background on this issue.

In 2011 FTPE bought some electric trains. Bolton’s line wasn’t electrified (and still isn’t) but they wanted to bring the new trains into service in 2013. They decided to take the Manchester -; Scotland trains which served Bolton and divert them through Wigan so that they could use the trains on an electrified line.

I met with FTPE on 15th November 2013 and I had two main concerns.
1) We needed extra support for other Bolton services during peak times to temporarily fill the gap left by the loss of key commuter services.
2) We needed assurances that this was temporary and these services would return.

At that meeting I was told that the Manchester-Scotland trains would return to Bolton when electrification was finished (at the time expected in 2016).

This is part of the booklet put out by FTPE at the time, indicating to the public that FTPE wanted to restore these services. 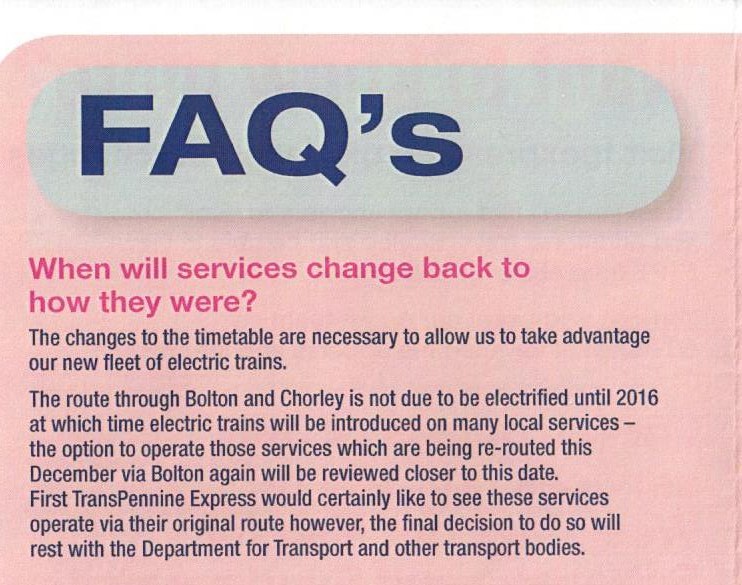 This is an extract from an email sent to Bolton Council’s Dave Chadwick demonstrating the scale of the reduction for Bolton commuters.

This is an extract from a further email, sent to one of my constituents, promising that the service would ultimately improve.

I had further meetings with FTPE at my Bolton office on 20th June 2014 and 28th August 2015. In every meeting I have asked them to confirm the Manchester-Scotland link will return to Bolton and been told it will.

I am not the only one to have been given this impression. The Bolton News have repeatedly reported that the service will return, most recently on 5th February 2018.

Despite all of this, as the year began I heard rumours that FTPE were planning to use Bolton’s train line in order to meet their promise on paper, but not allow Bolton residents to board the service.

I wrote to Northern and FTPE to ask for updates on their plans, and this email from Northern dated 18/1/18 confirmed the rumour.

I wanted confirmation in writing directly from FTPE. I had to repeatedly push them for a straight answer, but they have now said the same thing. I received this on 20/3/18.

To get to Edinburgh or Glasgow in peak time, people will still need to take a slow Northern service to Manchester or Wigan first.

Those hoping for relief on the overcrowded trains in and out of Manchester will get no help.

This is a clear broken promise to Bolton residents.